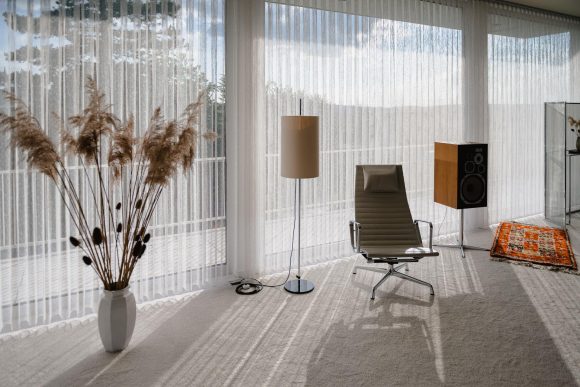 It’s hard to believe that this beautiful, pristine two-level bungalow is not located in Palm Springs but only a few kilometres away from Darmstadt, in the picturesquely situated community of Roßdorf. The property is currently listed by Heimburger Immobilien and I immediately fell in love with it, when Fabian Heimburger of Heimburger Immobilien sent me the dossier.

The bungalow was built between 1964 and ’65 by midcentury architect Jan Lippert, who studied with Bauhaus co-founder Mies van der Rohe at the Illinois Institute of Technology (IIT) in Chicago from 1954 to ’56, after which he spent five years working for van der Rohe in his Chicago office.

Composed of simple geometric shapes, a flat roof, and floor-to-ceiling windows, the building clearly shows the iconic architect’s influence. Since the change of ownership in 2017, no effort has been spared to renovate and modernise the interior of the upper residential level in accordance with the specifications of the listed building. The result is around 200 m2 of restored living space that meets the requirements of Jan Lippert’s historical heritage down to the last detail and at the same time leaves nothing to be desired, even by today’s living standards.

After changing hands in 2017, the upper living space of the bungalow has been renovated in a way that spared no effort to gently modernise the interior and meet the standards of Lippert’s historical heritage.

More than 55 years after it was built the house is in exceptionally good condition for a home of its age, due in part to the relationship between the architect and the original homeowner, who was a master bricklayer and civil engineer. The renovation also upgraded the villa’s energy efficiency with the addition of insulation, waterproofing, and a new roof. All windows and doors were replaced without compromising the home’s historical aesthetic thanks to cutting-edge, triple-glazed aluminum frames. Plus, a new heating system combines radiant floor heating and wall heating, both powered by gas.

For more information head over to Heimburger Immobilien.