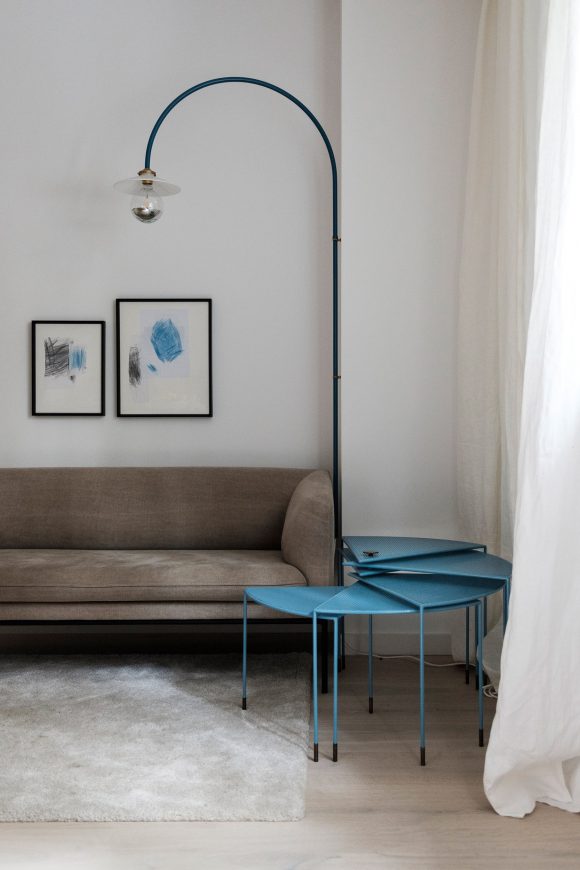 I just can’t get enough of the work of German Studio Oink – their latest project is 245sqm apartment in a new building in Frankfurt am Main with two floors, a terrace and a garden.

Despite some furniture the client already owned, Studio Oink was in charge to create the whole interior concept. Only the kitchen was built in cooperation with another kitchen design studio and despite Lea Korzeczek and Matthias Hiller brought their own design suggestions, the final result turned out a bit different than they had in mind.

The picture above shows the seating area with the Turn Sofa from Ferm Living, the Hanging Lamp by Muller van Severen and the side table Tavolo basso 043 by Dimore Studio break the soft gray of the kitchen and refer to the further shades of blue-gray, which was the basis of our color concept.

The customers wanted a light and open living concept with enough storage space – so Studio Oink planned a large closed cabinet wall in the living room.

In the living area, Studio Oink opted for the cozy and classic Ghost sofa by Gervasoni. With its blue-gray loden fabric, it looks very elegant and but is yet hard-wearing. Different light sources were use for a comfy atmosphere. (Floor lamp behind the sofa is the Myfair from Vibia, Austere Pendant Lights from Trizo21). The ensemble is completed by the beautiful Enoki Coffee Tables from E15.

The dining area was painted in a rich brown based red by Farrow & Ball (Picture Gallery Red). Above the dining table is the chandelier-like Simbiosi Lamp by Davide Groppi for some playful intimacy.

The bedrooms with walk-in closets for parents and children are on the first floor, as well as the bathrooms and a study. A tinted white was chosen as the basic tone and is only broken through by the tones Parma Gray and Light Blue from Farrow & Ball.

The bedroom is simple and functional. A bespoke dressing table by Mauro Accardi & Silvia Buccheri for Medulum and a pouf by Normann Copenhagen in powder pink for some femininity.

The guest study also appears tidy and bright due to the light curtains and the custom-made built-in furniture. The Zyklus Sofa from COR from our customer’s inventory fits into the delicate gray atmosphere. A Trizo21 Austere Pendant Lamp hangs above the desk.